You are here: Home » Web Hosting » VPS vs Cloud Hosting – What’s the Difference?

There is much talk these days about Cloud and VPS hosting. Many people think that they are the same thing but it is not the case. One needs to be familiar with both these terms if in case you are looking to select one of them for your online business. We will further discuss in detail about vps vs cloud hosting and know how they differ from each other. 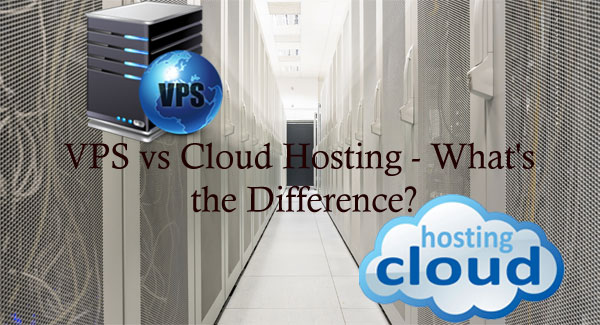 What is VPS Hosting?

A VPS or a virtual private server is a virtual machine sold as a service by an internet hosting service. A VPS is a single server that is distributed between a limited number of users. It is more like a shared hosting, where many user accounts are located on the same server. With VPS, a user gets more control over their share of the server. The users are separated from each other using virtualization software but this does not offer full isolation from your site being harmed if any of the user accounts on your server is hacked or infected by virus.

What is Cloud Hosting?

Cloud hosting is the latest form of web hosting that has been gaining popularity recently. Cloud hosting provides hosting services for website on virtual servers which utilize computing resource from an extensive network of physical servers. They give you high scalability and reliability and you get the power of a dedicated server.

A private cloud utilizes various resources that are distributed across multiple physical servers. So during an event like hardware failure etc, such kind of system gives you fully redundancy to transit to other servers on the network.

To make it easier to understand and tell the differences in a better way, we take Arvixe as our reference. Arvixe is so far the best web hosting providers and are popularly known for their VPS as well as cloud hosting. Since they are one of the cheapest hosts, we have decided to compare their hosting prices.

It is very clear that Cloud hosting is way more expensive than VPS.

Talking about their features then both come heavily loaded with features to give you brilliant performance.

Both VPS and Cloud hosting give unlimited data transfer and are fully managed. Starting with VPS first, they come with virtual DVD where you can mount your own DVD directly into your VPS account and access it within the operating system of your VPS. The Hyper-V technology which comes with dedicated memory ensures high level of isolation from users on the same server. VPS hosting usually come with 15 K RPM RAID 10 drives which are best in performance. The protection and security is taken care of using secure exit and entrance, DDoS attack response and robust firewall.

The main difference between a VPS and a private cloud is the location of the hardware. In Cloud hosting, your private cloud is situated on the site or on your data center. Some of web hosts offer you with hosted private cloud in which they use hardware for their own and is not shared with other users. While on the other hand, a VPS is generally hosted at an off-site or a third party hosting provider.

In this section, we shall discuss the pros and cons of VPS and Cloud hosting one by one.

Even if they seemed similar initially, but after going through the comparison between VPS vs Cloud hosting, we know that they are way different from each other. Both are equally good for the growth of your business but if you are running a large scale business where security, performance and speed are the major concerns then without having second thoughts, you should go with cloud hosting.

Web Hosting passionate guy and blogger. I have been playing with web servers since I was a kid. Love to solve web servers issues.